I've been thinking about tax today.
People and organisations avoid or evade tax in a variety of ways and I'm not well enough versed in the ways of accountancy to know many of them but there are a lot of very clever accountants getting very wealthy by using loopholes to allow their clients to dodge paying what they are morally, if not legally, obliged to pay.
If this were a company using a loophole to sell heroin or child pornography legally then there would, quite rightly in my opinion, be an outcry and hurriedly introduced legislation to stop the trade.
Where tax is concerned, especially by the big corporates and multinationals, it's quietly brushed aside or sorted out in a cosy meeting between the Inland Revenue and a director; probably quite easy to arrange as all this lot are likely members of the same clubs.
What is needed is a far more robust approach to tax collection.
My solution would be to introduce a "Tax Czar", in the same way that we have drugs, cancer and e-commerce (and probably a whole lot more).
There's a problem though; If the government were to appoint a Tax Czar they would seek candidates from the very people who made it their business to help people avoid tax in the first place; they would look at senior accountants in firms like Deloitte and PricewaterhouseCoopers. It's understandable too, who better to find and fix the loopholes than a "poacher turned gamekeeper" ? Except they wouldn't be the best, because they would come from the same environment as the people they are trying to catch out; they would be scrutinising their former friends and colleagues, members of the same clubs, alumni of the same universities.
So my answer would be to appoint someone who has no experience of accountancy, the city, Westminster and the "old boy network", an outsider who isn't afraid to lift stones and see the insects underneath, who isn't bothered if he upsets the status quo, who doesn't move in the same circles and doesn't cosy up and make little deals (I say "little" even though some of these deals are worth hundreds of millions).
I have someone in mind too. My first choice for this would have been Lord Prescott, but I fear he's been around Westminster and the City too long for people to have confidence in his impartiality.
So who would I appoint ? Me.
But what makes me suitable ? The fact that I have had nothing to do with the establishment for my entire life, have never lived or worked in London (apart from a 3 day stint for Amex in 1981 and a day sanding windows on a building site for a mate in 1982). None of my mates do either; they are normal working people who pay taxes.
And what would I want to do this ? Not much. £60k a year plus expenses and a company car (a Mondeo will be fine). Alternatively £30k a year and 1% of the extra revenue obtained.
I'd need staff too, people who understand the tax system, the aforementioned accountants, but who are only answerable to me; and if they try and cosy up to their former mates and do little deals, I'll kick their arses from here to Portsmouth.
And I'll set up headquarters somewhere that isn't dominated by the old school tie, Westminster and the City.
I'll need some teeth too; legislation to enable people who deliberately avoid tax to be sent to jail, same as those who evade it (avoidance is legal, evasion is illegal but both are immoral and should be treated the same).
I'll also offer a guarantee, give me a year to set it up and I'll give you the loopholes to close that will raise £1bn more in revenue. A billion pounds. £1000000000. That's a lot of cash.
There you go Mr Cameron, fancy it ? No, thought not, it might mess up any potential directorships.

On Friday evening Crystal Palace host Brighton and Hove Albion in the first leg of the Championship semi-final with the return leg being played at the Amex on Monday.
There's no love lost between the two sets of fans and whoever loses will feel the pain for a long time.
Recent form would suggest that Brighton have the upper hand but in these sort of games, form counts for little, often it will come down to a bit of luck somewhere and with Palace's success at winning penalties, not always completely fairly it could be argued, a single referee's decision could make all the difference.
In some ways I would rather we weren't playing Palace, because losing would be so hard to take, but on the other hand a victory would be so, so sweet; I would imagine many Palace fans are feeling exactly the same.
Like many Brighton fans, I have friends who support Palace and, although it pains me to say it, they are all decent people with a genuine love of football and of their team; none of them even lives in a caravan (at least, not that they admit). We have a lot in common, having had our highs and lows and I would much rather talk football with them than with some of the “plastic” Premiership supporters I come across.
For 90 minutes on Friday and Monday though, the friendship and cameraderie is put aside and they are Palace scum to me, as I am Seaweed scum to them. We would have it no other way.
Come Tuesday morning some of us will be bouyed by victory the previous evening and looking forward to an afternoon out at Wembley; some of us will be dejected by defeat, a feeling that won't be fully overcome until victory against the old rivals.
There will be those from both sides who will let the rivalry and passion spill over into trouble and violence but I hope that the police will control the crowds with firmness but understanding, despite the somewhat draconian conditions imposed on those buying a ticket.
Most of us, though will go along to one or other game (or both), cheer on our team and hope for victory without the need to resort to idiotic behaviour.
Whatever happens though, it's certain to be an eventful couple of matches and, like the majority of people (based on attendances at least) I will be hoping for a Brighton win.
Posted by Gary at 5:12 pm

Now is the time for marching
Now let your hearts be gay
Hark to the merry bugles
Sounding along our way
So let your voices ring, my boys,
And take the time from me
And I'll sing you a song, as we march along,
Of Sussex by the Sea.

Light is the love of a soldier
That's what the ladies say
Lightly he goes a-wooing
Lightly he rides away,
In love and war, we always are
As fair as fair can be,
And a soldier boy is the ladies joy
In Sussex by the sea.

Far o'er the seas we wander
Wide through the world we roam,
Far from the kind hearts yonder
Far from our dear old home,
But never shall we forget my boys
And true we'll ever be
To the girls so kind that we left behind
In Sussex by the sea.

New years eve was party time. It was fancy dress with a theme of 1970s. Most people were in the Abba gear but not me and Mrs C, oh no... 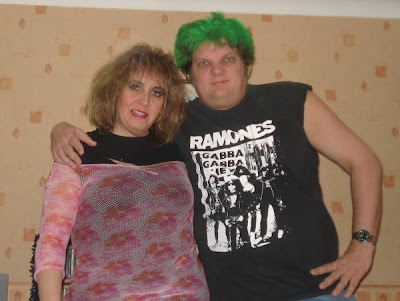 The big come down after Christmas

Many people, I suspect, will be feeling a bit down today having to come back to work after a few days off enjoying the company of their families.
Lucky me, I'm suffering no such comedown as I worked until gone 10pm on both christmas and boxing days. I shall be working New Years Day ((c) U2) as well.
Sounds tough, but such is the life of a rota man.
I shall do my celebrating later in the year, in sunnier climes, paid for by the overtime earned for the three days I missed out on.
Sangria anyone ?
Posted by Gary at 1:48 pm

I notice there's a new Jim Carrey movie out. I could go and see it, or I could go into the garage, get two nails and stick them in my eyes, I think that would give me more pleasure.
Posted by Gary at 10:33 am 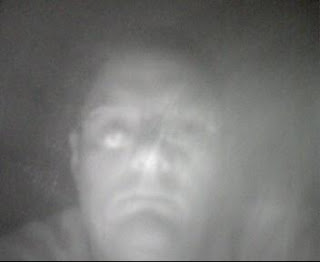 I converted a camera to infrared :-D
Posted by Gary at 6:44 pm

Back in safe(r) hands

Woohoo !
It's been a good week so far, I earned a bit of cash, booked a holiday and Eastbourne council has swung from Conservative to Liberal.
Posted by Gary at 12:50 pm 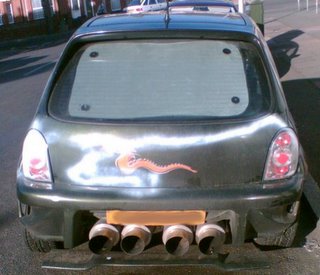 Saw this today outside the wet fish shop...
I had a laugh at the "jet-fighter" exhausts but then noticed that some b****r had vandalised it and I felt sorry for the owner.
Posted by Gary at 6:48 pm

Thank goodness it's all over and we can get back to normality. All that's left to do now is to finish up all the little bits we didn't eat over the "festive" period; so that's about three pounds of nuts every day for the next week then...
Posted by Gary at 5:50 pm

This afternoon I tool my son to find some conkers. I took a set of drain-cleaning rods to hook them out of the trees. Trouble is, the rods are a bit flexible so I could only get about 15 feet high before they started sagging...
Anyway, after about an hour, we managed the grand total of 8 conkers.
Posted by Gary at 5:04 pm

I had to go to the dentist this morning to have my teeth cleaned. I've not been for a while so he froze one side of my face and then gave me the treatment. Now I'm sitting here with a numb left side of my face, feeling like a stroke victim.
Worst of all is that I can't bottle out of the next session because I now have half a set of nice white teeth.
Posted by Gary at 9:57 am

Here I am sitting at an office in Crawley. They call it "City Place" so that the name sounds swish and dynamic but actually it's a large open-plan office on the edge of Gatwick Airport. There's nothing round here except a pub (so guess where I'm going at lunchtime) and a sewage works, so that when the wind blows from the east there's a smell of shit.
The breakfast is nice though...

What do I put ?
Is it just a place for some obscure ramblings or will anyone actually bother to read it ? I doubt if they will (I wouldn't).
Posted by Gary at 8:28 pm